What is the iPhone image file format? When I work with the files that are on the phone I see some that are in jpg and png format. I understand the difference between the file formats. I’m just curiuous about when the iPhone creates which.

One of the features of the new iPhone 3 OS that I discovered quite by accident is the ability to “undo” typing.  Just give the phone a quick shake when you’ve typed something you don’t want.  The “Undo Typing” dialog will slide onto the screen.

If you happen to shake the phone when there is nothing to undo then the “Nothing to Undo” dialog will slide onto the screen.

This handy feature isn’t available everywhere in the phone.  For example, the keypad used for actually dialing telephone numbers does not support undo.

I discovered a feature of the iPhone accidentally today. When a text message fails to send the iPhone helfully displays a warning sign next to the text message.

Clicking the exclamation icon brings up a handy dialog to ask if I want to send it again.

I don’t recall having seen this feature before, so it might be new with the iPhone 3 OS release.

The recent launch of the iPhone 3.0 OS was the smoothest of all of the major updates that I’ve had (read about those adventures here and here).  When I saw the prompt below, an enormous sense of dread swept over me.


I had no problems this time.  So, I figured I’d highlight some of the things that I find interesting.

Apple added the ability to record voice memos.  I was a little bit peeved that they forced it on to the main screen, however, as they kicked one of my applications off to do it.

One of the long-awaited features is the ability to search the iPhone.

Apple made one minor improvement in text messaging.  They changed the progress bar from an overlay that covered the entire screen to a little bar in the top of the screen.  This has the effect of allowing you to continue with composing your next message while one is sending.  That is particularly useful when you are trying to have a quick-witted conversation.

As an added bonus, you can now turn your iPhone sideways to send test messages.

I’m not sure how useful of a feature that actually as you don’t really get to see much of the conversation.  Of course, the text bubble could have all been placed on one line.  The keys are bigger, so it may help those who have difficulty hitting the correct one.

This is a test posting from my iPhone using the WordPress iPhone application. This posting was much simpler than the original test post using the phone’s Safari browser.

Apparently there are scenarios where the Apple iPhone thinks that the headphones are plugged in.  For example here.

The solution is, as mentioned in many places, to repeatedly plug in and remove the jack.  This will convince the phone that the headphones are not plugged in.  Be sure to have the iPod playing something so you can hear when the phone resets itself.

It would be nice if Apple would determine what the source of the problem is and issue a patch that resolves it.

Updating the Apple iPhone software seems to be an annoying / frustrating experience.  I’ve previously written about the nightmare update when the iPhone 3G was released.

While today’s experience wasn’t as bad as that last session, it was not without its problems.  The iTunes application kept seizing the window focus and telling me about its progress.  While I do appreciate knowing what applications are doing, it is not “okay” to steal the computer’s focus just to tell me that the application is still doing what I just told it to do.

This sort of messaging just isn’t that important.  I just don’t need to know that badly.  It is rude for applicaitons to take over like this.  Apparently whatever task I was performing while this update is taking place is simply not important enough to allow me to continue doing it.  Sorry, Apple, but you have things backwards in this.

I wonder:  would the iTunes application have behaved this badly if I had used my MacBook Pro to update the software on the iPhone?

This post is being done from my iPhone. Because I can. The phone doesn’t want to display the visual editor. Now that I know that it will be quicker to do this. Now … If I could just master typing on the darn thing.

This is a little late, but last Friday (July 11, 2008) I took Apple iTunes’ advice that it was time to update my iPhone. Little did I know that it would be an adventure through confusing messages from the iTunes application and non-existent information from Apple on what was happening. By now we all know that Apple rolled out the new iPhone 3G and updates to existing iPhones. Their authentication servers simply could not handle the load.

Everything started OK. iTunes told me about all of the nifty things my iPhone would be able to do right after the update. 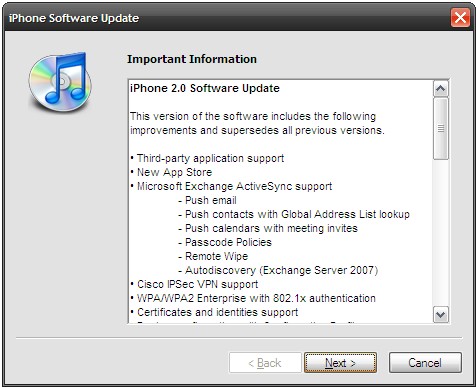 I was soon greeted by this rather disturbing message: 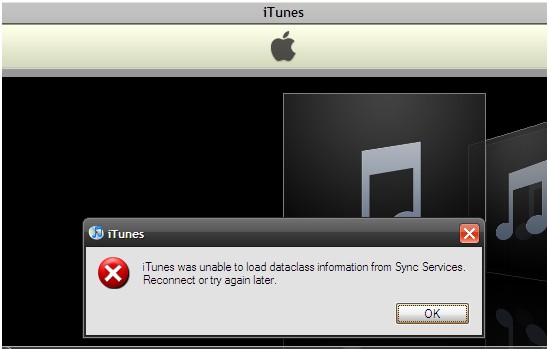 So I did. iTunes then informed me that there was a problem with my internet security settings were wrong.

A quick check revealed that both SSL 3.0 and TLS 1.0 were enabled. 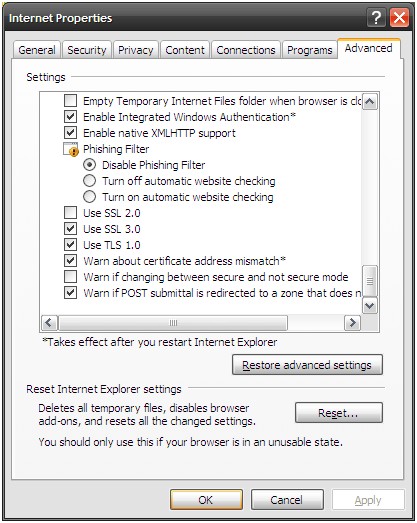 Trying again didn’t really change anything. I received the message a few times, but it couldn’t give it much attention as I needed to get some actual work done.

Later, iTunes would sit on the “Accessing iTunes Store” step for extended periods. 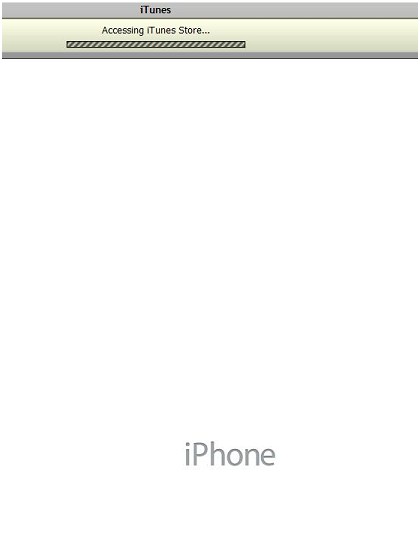 Eventually, it would timeout with a slightly more informative message than the SSL/TLS message.

(Yes, I did switch computers during this process. I’m good programmer after all … try different tricks to see if something works …)

By this stage, I knew that Apple was having problems. I would just have to be patient. I figured I’d check on Apple’s web site to see if they had any sage advice. No such luck. 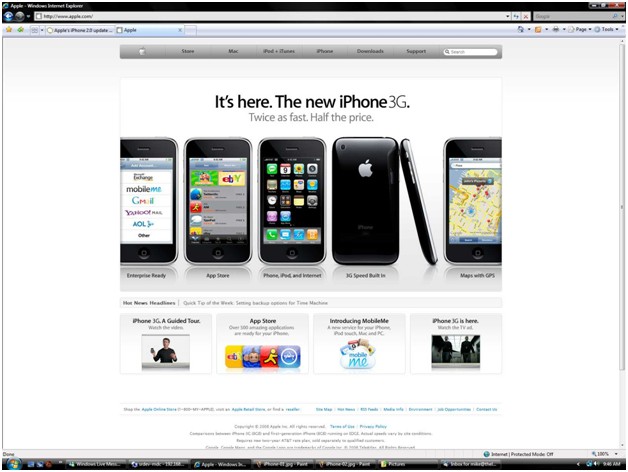 So, I spent much of the morning looking at this: 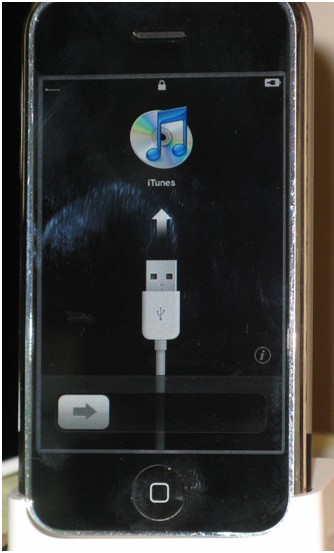 After about 4 ½ hours I finally received a message on the phone that all would be well. 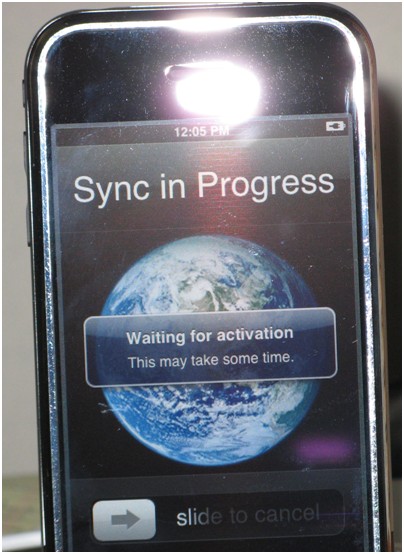 And Apple’s web site today tells how successful the iPhone 3G rollout and upgrade for existing phones was. 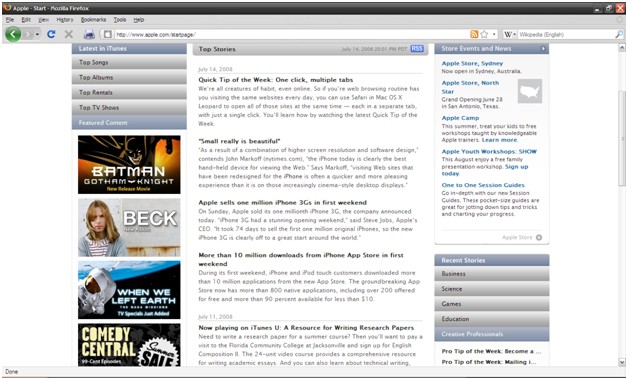 There are a lot of seemingly interesting new features on the updated iPhone. It will be interesting to see if the iPhone will be able to attach to my employer’s rather finicky VPN for one. The ability to add third-party applications also looks interesting.