Honda has recently begun running an add that features Judas Priest’s The Hellion. I have no problem with Priest music being used in advertising. The problem is that the video playing inside the van isn’t Judas Priest.
That’s Not Priest on the Screen

As promised, I got to see Judas Priest live in Seattle last night at the WaMu Theater with my son and a friend of his.  And, as predicted, the Priest opened with Dawn of Creation/Prophecy.  Halford came through the set wearing a robe covered in chrome (the picture sucks a little … what do you expect when taking a picture of a mirror?). 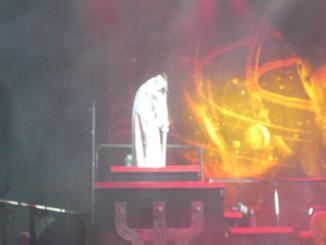 The set covered all of the classic material like Breakin’ the Law, You’ve Got Another Thing Comin’, Hell Bent for Leather, Painkiller, and The Green Manalishi as well as some more unusual choices like Dissident Aggressor and Hell Patrol.  You can get a complete set list here.  They chose a nice mix of songs.  The audience seemed to respond.

I’ve seen Judas Priest (and Fight/Halford) many times.  This was a very good show.  Halford was far more animated and interacted with the crowd much more than some recent shows I’ve seen.  The whole band, I think, was in top form.  It was clear that they were excited to be on the road in support of some very good material.

We had third row seats on the left side of the stage as the crowd faces the stage.  KK was right in front of us the whole time.  The view doesn’t really get any better than that.  (You might have noticed that third row is a little different from second row that I mentioned earlier.  With the way WaMu Theater laid out the seats for this show it was effectively second row.)

One thing I think I will always remember from this show is Halford walking out on stage during the “encore” and upon reaching the Harley saying, “I’m such an idiot.  I forgot something.”  And then turning around and walking back off stage looking for his assistant.  He had forgotten the American flag.

Testament opened the show.  I’ve seen Testament before (oddly enough opening for Judas Priest the last time I had second row seats).  Testament was, well, Testament.  You either like Testament or you don’t.  I don’t and their performance didn’t do anything to change that.

All in all, a very good show.  Money and time well spent.  Keep up the great work, guys!

To those who know me, it isn’t a secret that I’m a big Judas Priest.  I have every album.  The latest album, Nostradamus, is in my opion their best complete work to date.  There are arguably better single songs in their catalog, but no better complete album.

Nostradamus is a massive two disc set.  It comes in at nearly two hours running time, their longest studio work.  The songs flow seemlessly from one to the next.  It is as if the album was written with the thought of Judas Priest staging an opera based on this work.  I’m, obviously, not a fan of opera … but if Judas Priest were to do such a thing and Rob Halford was to play the leading role I would do everything in my power to see it.  (Bill Curbishley if you come across this … hint … hint … )

Priest has always been masterful at creating characters within their songs (The Ripper, Tyrant, Killing Machine, The Hellion/Electric Eye, and Painkiller to cite just a few).  Nostradamus creates the character on a scale they’ve never done before; a scale which few other groups have ever been willing to attempt.

In this effort Priest is mixing things that are new to them (strings, keyboards, …).  This includes some significantly slower, more ballady songs that bridge the major movements.  Some hard core fans won’t like this.  They’ll look at it as being “too soft” or “not Priest enough.”  But you really have to look at these elements as being essential to the complete story they are trying to tell.  And that story is of the man Nostradamus and the struggles, some say madness, that he went through to deliver prophetic visions that endure to this day.  A handful of rocking songs won’t cover that story in the detail Priest accomplishes in this epic work.

A little later this summer I’ll being seeing Judas Priest again and from the second row (again).  I’m looking forward to seeing how they incorporate material from this album into their live show.  Will they start with Dawn of Creation/Prophecy or will they go for the ear-breaking intro of Rob riding a Harley on stage to start Hell Bent for Leather?